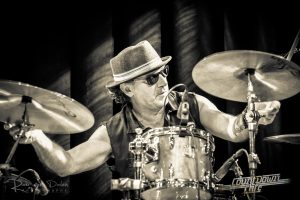 Besides Peter on drums and vocals the power trio has guitar virtuoso Maroen Franse on guitar and vocals and American Dutchman Dave Bordeaux on bass and vocals at the front of the stage. Dave is not the only link to the US. Maroen left Holland for LA at the age of 16 to study guitar at the famous GIT where Steve Vai and Eddy van Halen were among his teachers. Peter has worked for the American Billbard Magazine for a number of years.

Started in the The Hague area in Holland the band now devides their time between The Hague in the West and small village Bergharen in the East where they have their own recording studio next to the house where drummer Peter lives.

They play their songs with high live energy and use all their vocals for tight vocal harmonies and choose the lead vocal that fits the song best. Not a lot of bands that can do that. It makes them sound very American.

3voor12 (VPRO) called their sound a combination of Eddie Vedder, The Red Hot Chili Peppers and an early Aerosmith. We like that idea and compliment, but to us LaBomba sounds like…….LaBomba.

Early 2018 LaBomba released their first album “Fresh, Loud and Different” and that is what they are. Fresh, loud and different.

The band did a great presentation of their second album during Eurosonic, got great reviews, started a release tour and had summer festivals plannend………and then Corona threw everything aside.

So….what do you do?….. You start writing and recording your 3rd album. To be released track by track starting september 2021.

In 2022 LaBomba will support American rockers Los Lobos on their tour when they will hit Paradiso in Amsterdam.